The role of the surgical treatment of hiatal hernias changes dramatically in the 90’s years of the 20th century, when started antireflux operations, nowadays used as routine method all over the world.  The reason for it is the increasing popularity of mini-invasive (laparoscopic) surgery, allowing not only change of the surgical technics itself in antireflux operations, but a change of operative access. Thus, still more surgeons today use mini-invasive technics in the surgical treatment of gastroesophageal reflux diseases (GERD) and hiatal hernias.

Often GERD is associated with the existence of hiatal hernia. Although all types of hiatal hernia may provoke the classic symptoms of reflux, it is more frequent in type 1 hernia, called also sliding hiatus hernia. The latter appears when gastroesophageal junction is not fixed in abdominal cavity by paraesophageal ligament (membrane) and cardia would migrate down & up between the posterior mediastinum and peritoneal cavity. Although the existence of small sliding hernia is not always related to disturbed cardia function,  the bigger is the hernia the bigger is the risk of abnormal gastroesophageal reflux.

According to its anatomy, hiatal hernias are classified in four basic types.

Type 4. We observe it when in thorax there is another organ except stomach.

The most often symptoms of GERD are:

- long history of burning sensation behind the thoracic bone and epigastrium, similar to contraction or shooting pain

Pre-operative assessment of the patient is done to confirm diagnosis, exclusion of other liable pathological process and directing the surgeon to the nature and size of forthcoming intervention.

An important step in patients with GERD, who are subject to operative intervention. It allows exclusion of other pathological process (tumor especially) and looking for peptic ulcer of esophagus. Esophagus injury may be graded by the score system – i.e. the scale of Savary-Miller: 1 = erythema; 2 = linear ulceration; 3 = confluent ulcerations; 4 = stricture. The most severe damage of esophagus is the so called Barrett’s esophagitis.

Gives valuable information in the planning of operative intervention and in bad response to the conservative treatment. Spontaneous reflux is often observed during the examination.

Most people have had reflux symptoms in their life.

Changes of life mode (smoking discontinuance, reduction of caffeine intake and avoiding digestion of big quantities of food prior going to bed, lifting of head) are important for treatment of GERD.

6. Change of life mode– described above, with unproven effect in long-term plan

Proton pump blockers are considered to be most effective for inhibition of stomach acidity, their effect appears after 4-days treatment approximately and persists about 4-5 days after its discontinuance. Relatively expensive, but with good tolerance, they are significantly more effective that Н2-blockers. Side effects– headache, abdominal pains, diarrhea. Prolonged treatment with these medicines is considered to be safe, but may be related to appearance of stomach polyps (hyperplastic polyps, which are not precancerosis). 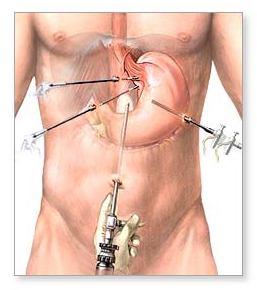 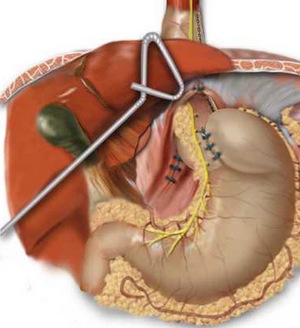 Introduction of proton pump blockers in the clinical practice changed to a certain extent the indications for surgical treatment of GERD.

Indicated for operative treatment are the individuals with severely damaged esophagus (ulcer, structure, Barrett’s esopahgus) and incomplete reflux development or recurrence of symptoms on the background of medication, these with big duration of complaints or persisting of the latter in young ages. The described groups of patients are indicated more for operative than for conservative treatment.

Indicated for operative treatment are the patients, who do not response to the medication, especially due to the fact that today we have available mini-invasive technics, which price is significantly lower. Taking into account the prices for treatment with proton pump blockers and that of the operative treatment and the success of both approaches, the time for which the conservative treatment becomes more expensive than the interventional one is 10 years. These calculations are made on the basis of administration of the lowest doses of the drugs. Thus, at  expected duration of life of over 10 years and the necessity of life-time treatment related to anatomic defect of LES, the operative treatment is the method of choice.

Have a question? We look forward to hearing from you!

We have placed cookies on your computer to help make this website better. You can change your cookie settings at any time. Otherwise, we'll assume you're OK to continue. Read more
Accept